Following reasonably closely the route of the Ring of Kerry but taking in even more tranquil areas and breathtaking scenery is the Kerry way. This is the longest way-marked trail in Ireland, taking in Killarney National Park, mountain passes, and coastal paths. Its circuit of the Iveragh Peninsula is 215k (135 miles). At Carrig, we can provide you with maps, guides and advice on walking the Kerry Way as well as the Kerry Mountains. 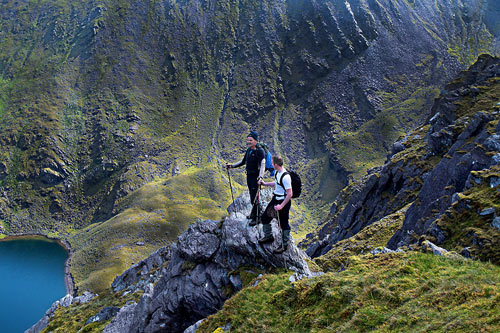 With the magnificent backdrop of the ‘Reeks’, Carrig Country House Hotel is within a stones throw of some of the finest walking and climbing in the country.

The Killorglin/Killarney area is a haven for walkers of all ages and levels. From an exciting hillwalk on the soaring McGillycuddy Reeks to a pleasant stroll through the world famous Killarney National Park, there is something for everyone.

Walking is one of the best ways to appreciate the sheer beauty of the Gap of Dunloe and McGillycuddy Reeks up close. Start early in the day to make the most of the rugged mountain scenery with vistas opening on each side of dramatic cliff faces and pristine lakes.

We highly recommend you hire a guide if planning a hike in the McGillycuddy Reeks. There are a number of local professional guides available.

The Kerry Way is one of Ireland’s most popular long distance national waymarked walking trails and at over 200km (125miles) in length, Ireland’s longest. The well signposted Kerry Way consists mainly of ancient paths, old highways, coach roads, Butter Roads and Mass Paths connected by stretches of new trails and of back-roads still in use.

Walking advice
Plan your walk and be prepared for Ireland’s changeable weather. Some essential items may include suitable clothing and footwear, water, food, sun screen and a fully charged mobile phone in case of emergency and also consider a backup battery pack. 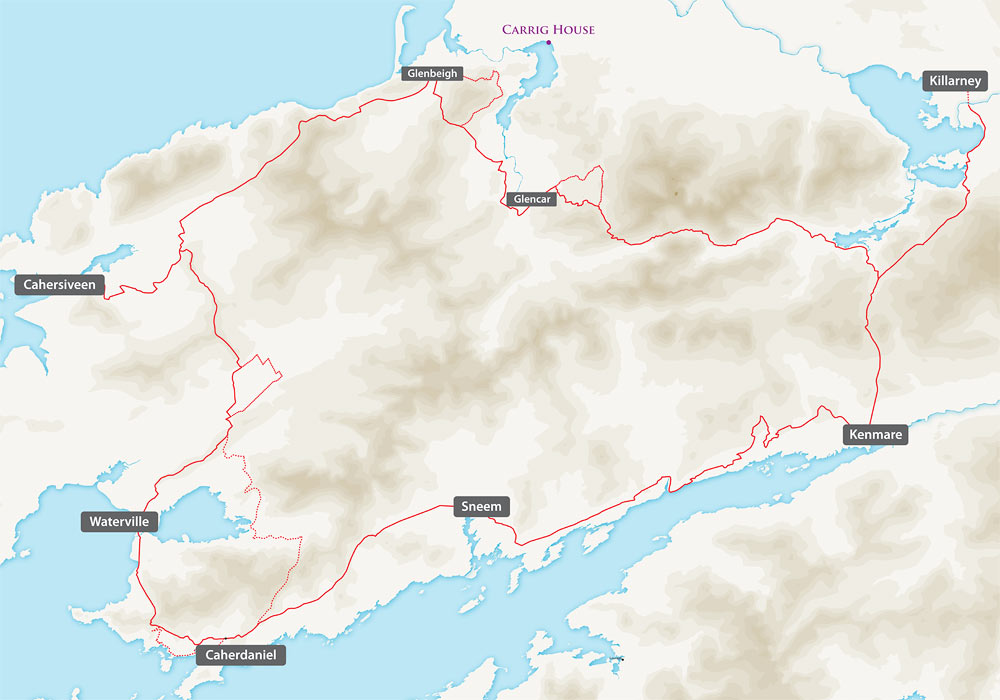 “In County Kerry we also found the perfect place to stay, the Carrig Country House, on the shores of Caragh Lake, which is fringed with mountains unsullied by development. The Carrig Country House typifies the kind of inn that Ireland does especially well – more cozy than ostentatious, brimming with antiques, scented by wood-burning fireplaces, surrounded by meticulously tended gardens”.

This website uses cookies to improve your experience while you navigate through the website. Out of these, the cookies that are categorized as necessary are stored on your browser as they are essential for the working of basic functionalities of the website. We also use third-party cookies that help us analyze and understand how you use this website. These cookies will be stored in your browser only with your consent. You also have the option to opt-out of these cookies. But opting out of some of these cookies may affect your browsing experience.
Necessary Always Enabled
Necessary cookies are absolutely essential for the website to function properly. This category only includes cookies that ensures basic functionalities and security features of the website. These cookies do not store any personal information.
Non-necessary
Any cookies that may not be particularly necessary for the website to function and is used specifically to collect user personal data via analytics, ads, other embedded contents are termed as non-necessary cookies. It is mandatory to procure user consent prior to running these cookies on your website.
SAVE & ACCEPT
×